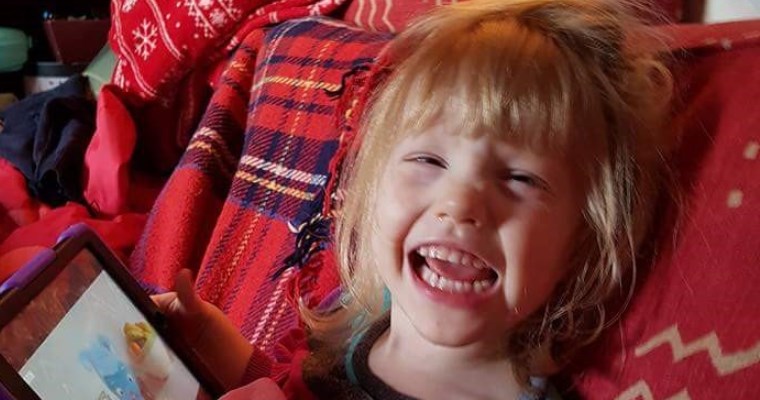 A journey into the unknown by Susie and Ben Slack

When we decided to include Jo-Jo’s story in our InTouch Autumn newsletter to supporters, we received the following, which we felt we really wanted to publish in full online, as we are limited to shorter articles in our printed article.  The passion and dedication of Jo-Jo’s parents is clear to see through their words.

What is Gillespie syndrome in easy-to-understand language and how is cerebellar ataxia a part of that condition?

Gillespie Syndrome is an incredibly rare, little-known condition presenting with a unique and unusual set of characteristics.  Children are born with GS and at first the most notable feature is their eyes which have large pupils, unresponsive to light. This is followed by a delay reaching developmental milestones such as rolling over or sitting alone.  Once babies with GS become more active it becomes clear that they are wobbly and un-coordinated; this is due to Cerebellar Ataxia. The part of their brain which deals with coordination, balance and spatial awareness hasn’t developed properly, standing and walking is a huge challenge.  Some children with GS may never learn to walk, those that do only ever manage a few steps.

Because of the ataxia, everyday activities, such as eating, dressing, playing, even just sitting still in a chair, are a huge challenge; bumps and bruises are a daily occurrence. The ataxia also affects speech, so a child with GS will sound slurred, speaking with an odd rhythm or speak too loudly. Some children also experience problems with swallowing and digestion. GS is also associated with mild to moderate learning difficulties.

Jo-Jo – always a smile on her face

Our 6 year old daughter Joanna, or Jo-Jo as we like to call her, has Gillespie syndrome. She is a happy little girl with a sunny nature, charming to everyone she meets. She loves music and is often heard singing loudly at the top of her voice, making up her own songs. As soon as she hears a tune she has to dance in her own unique way, her favourites are the ones with a good thumping beat. She loves fashion, dressing up and looking chic; she always comments on everyone’s outfit, giving them the thumbs up or thumbs down – she’s quite the fashion guru.  Jo-Jo continually amazes everyone around her with her determination and sense of independence; her drive to get on with life and join in with her peers. She attends a main stream primary school in Belper, Derbyshire, where she is doing really well despite the obstacles someone with her condition faces – she always tries so hard. She is a popular character with staff and pupils alike.

We were more than happy to take part in the Derby Ataxia awareness campaign (in July 2018), as personal experience has shown us how little is known or understood about ataxia. Most people, including professionals in health and local government, at best don’t fully appreciate the implications of the condition, at worst haven’t even heard of it. This makes getting the right support very difficult, we simply weren’t prepared for the journey Jo-Jo and her condition would take us on.  It took us five years to obtain a diagnosis, during which time various different doctors attempted to discover the cause of Jo-Jo’s unusual symptoms. We attended many appointments, some needlessly, including ultra sounds checking for kidney tumours, which we later found to have been unnecessary, but at the time caused us all a lot of stress and worry. Eventually, thanks to support and information provided by Ataxia UK leading to a referral to the Ataxia clinic at Sheffield Children’s Hospital, the diagnosis of Gillespie syndrome was finally confirmed by genetic testing. I suspect that without Ataxia UK we would still be in the dark concerning Jo-Jo’s condition.

Greater understanding of ataxia would definitely help children like Jo-Jo, both at school and later on in life, to achieve the independence they need and crave. Cerebellar ataxia is a very complex condition which affects planning and spatial awareness, as well as balance and coordination. I suspect no one, including us, as parents, can truly appreciate the challenges Jo-Jo faces day to day. We either underestimate her capabilities, much to her frustration or, the next moment, too much is expected, such as chatting at the same time as steering through a doorway in her wheelchair, for instance.

She is often treated by adults as a bit of a novelty, on occasion well-meant jokes have been made about her “drunk driving” when she’s walking in her frame, otherwise they keep a polite distance. She often doesn’t respond to a greeting when she first arrives somewhere. It appears as though she is rude or isn’t quite “all-there”, but it just takes her longer than normal to process new surroundings. Children meeting her for the first time are wary, they just don’t seem to know how to play with her. Her walking frame is a quite literally a barrier to intimacy. They quite often don’t want to hold her hand at a party. Children are too fast moving, she can’t keep up.

What are your worries and hopes for the future?

Our worries for the future include concerns about what level of independence Jo-Jo will eventually achieve. Will she be able to live alone or will she still need live with us? If the latter is the case, what will happen when we become too old to care for her? What will her health be like in the future? We don’t even have a clear idea of the expected life span of an individual with GS. The oldest known person with GS we are aware of (from scientific papers) is around 40 year old!

More immediately are our concerns regarding her education. Each year we are faced with justifying local authority funding for one to one support and specialist equipment in school. It is so important to be able to present a clear and robust argument outlining what we believe to be essential for her welfare and learning. This is very difficult without a clear understanding of her condition, particularly regarding the cerebellar ataxia. As long as ataxia is misunderstood or unheard of, it will continue to mean very little on an application form or to an educational review panel. Scientific research and awareness campaigns can fill in the gaps and raise the profile of ataxia; generous donations and fundraising are essential to help to make this happen.