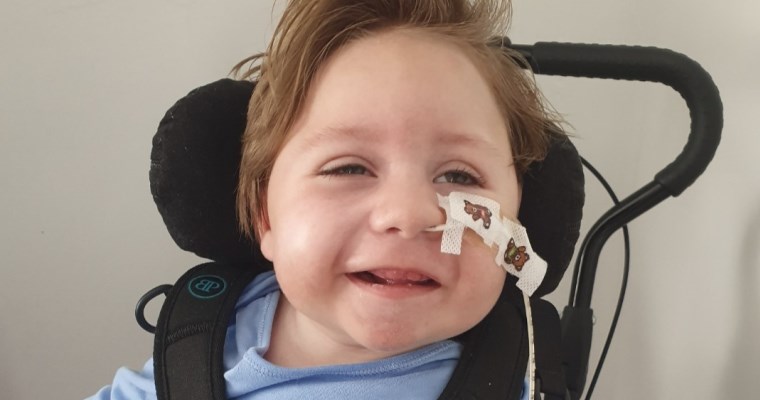 Two-year-old Oscar-Ray arrived safely at 40 weeks, after a problem-free pregnancy for mum, Charlotte.  But just two days later, he began having seizures and was rushed to the hospital neonatal unit to be observed by a specialist team, where he was having up to five seizures an hour.

It was an agonising three months before doctors were able to confirm a diagnosis of Migrating Partial Seizures of Infancy – a serious form of epilepsy that starts early on in life and causes severe developmental delays.  As a result, Oscar-Ray is unable to sit or hold up his head unaided, doesn’t reach out for things and requires 24-hour, round-the-clock care.

“After months of tests in hospital, we were finally able to come home, but my anxiety was through of the roof. Adjusting took a while. In a way I was grieving for the child that I thought I was going to have. To be told that Oscar’s got a life limiting condition and that children with Oscar’s condition don’t usually live past early childhood, there’s so much to take in and so many emotions”, says Charlotte.

It was at this time that Charlotte was introduced to Acorns Children’s Hospice as a place where she could find the specialist care and support she needed, not just for Oscar-Ray, but for herself too, as she explains:

“The thought of leaving Oscar at that point was like, no. I didn’t ever think I would do that. I had no idea what was going to happen or what it would be like there. But I knew that would be something good for Oscar.  Now I’d be lost without Acorns. I can’t leave Oscar with just anybody, Acorns has just been amazing. I’m allowed to just take him there and I get the freedom to unwind.”

Charlotte is now focussed on making sure every moment counts and, with the help of Acorns, she and Oscar-Ray get to create memories they never even dreamed of.

“He gets to do so much at Acorns. I never thought that Oscar would make cards and crafts but at Acorns he does. They’re precious things that I can hold on to. They’re things I’m going to have forever.”

Supporting Childlife means you are helping families like Oscar’s who rely on Acorns to bring them a sense of normality – to allow them to be a mum and son while they are there and to enjoy the time they have together in a safe environment.