“Suddenly I had a deaf child” 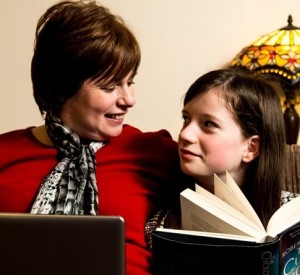 Georgia wasn’t born deaf.  She passed her hearing tests as a baby, but after years of ear infections, antibiotics, mis-diagnosis, pain and frustration, culminating in a severe ear infection lasting two years, her family were told the devastating news that  11-year old Georgia had lost all hearing in her left ear.

As a single parent of three children, her mum, Carol, suddenly felt alone in a very confusing and unfamiliar world. Like more than 90% of parents with deaf children, she had no previous experience of deafness. On top of that, the paperwork involved in applying for Disability Living Allowance (DLA), a benefit for children under 16, was proving a huge challenge and the impending move to secondary school was throwing up all sorts of questions which Carol couldn’t answer.

“It was such a worrying time after she was diagnosed,” said Carol.  “Georgia was very upset, she had a ‘normal’ childhood so the news was hard to come to terms with.”

A specialist suggested the best way forward was for Georgia to have bone-anchored hearing aids.  Under anaesthetic, a screw would be attached to her skull behind each ear, and processors attached, enabling the right side to feed the left, bypassing the damaged nerve in Georgia’s left ear.

“Suddenly I had a child diagnosed as deaf and the prospect of a scary sounding operation.  I had no-one to turn to – it was a very frightening time for us,” Carol explained.

Not long after the operation, Carol saw an advert for the National Deaf Children’s Society (NDCS) Freephone Helpline and called to ask for help with applying for DLA, having previously been turned down.  Less than 24 hours later, a children and families’ support officer from NDCS was sitting with Carol, helping her to complete the form.  Although the application was declined again, NDCS helped her to appeal. “Finally we got it,” said Carol.  “And they backdated payments.  I’d never have done it without NDCS.”

And NDCS were on hand once again to help Carol through the minefield of deciding whether Georgia should go to a mainstream secondary school or if they should look for a place at a school for deaf children. Carol chose the mainstream school already attended by Georgia’s older brother and sister. The teachers at Georgia’s new school make sure that they maintain eye contact and she always sits in a particular seat at the front of each classroom. They have been excellent in terms of meeting Georgia’s needs and Carol is confident that they made the right decision.

“I’m so glad I contacted NDCS” says Carol. “Before then, I was feeling completely alienated from society. Nothing was provided as a support blanket for us, I had to fight for everything. Until NDCS came along, I didn’t know there were charities that could help me.”

Your support is helping families like Georgia’s to get back on track when they most need it – every £1 Childlife passes onto NDCS pays for a minute of Helpline support.